In search of a most efficient action plan, I study the past and look into the future.

I have been very lucky, indeed: I have lived three different lives. The first one was in the Soviet Union. When I was young, I successfully adapted to the then-dominating model: I studied political economy and graduated with honors, I was a Komsomol leader and then a communist. I accepted the rules of the game and tried to modernize the old system, because I understood how it worked, what its weaknesses were and what had to be changed. This life can be compared to renovating an old house.

The second life began with the collapse of the Soviet Union. I and my partners found ourselves in a start-up which we had to get going on the ruins of the ex-empire. Luckily, we had our benchmarks: the leading world practices. This life can be compared to building a new home, but using the designs already available, mutatis mutandis.

The circumstances of my third life – today’s life – are an ideal storm. No one has a decision ready for the complicated global and local issues. Today, in addition to erecting a new building, we ourselves have to devise its construction, develop the design documents, method statement, etc.

In search of a most efficient action plan, I study the past and look into the future. To build the new system, I have, in a sense, already emigrated to the future and I am working there in an attempt to change the current circumstances in light of my vision of the future. In this way this approach differs fundamentally from the commonly used methods targeted at improving gradually the existing economic, social and legal framework. 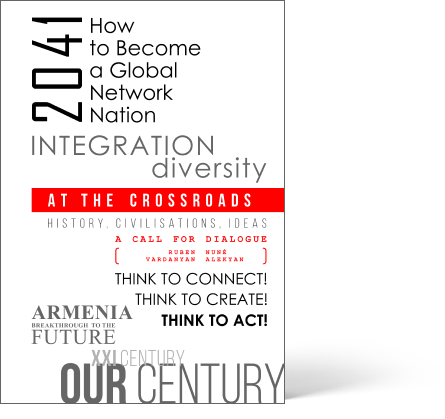 Think to connect! Read the discussion paper, share your thoughts with is, argue and think together thus helping to create a common vision for the future.
Discussion paper Summary Materials for discussion

We invite you to engage in a dialogue